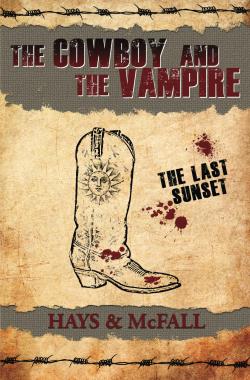 Book Title: THE COWBOY AND THE VAMPIRE: THE LAST SUNSET

Series: The Cowboy & The Vampire Collection #4

Main Characters: Tucker/Lizzie, and a lovable (and loathable) cast of characters

Source: Review copy provided by the author for an honest review

Take one long, last look at LonePine, Wyoming, population 438. It’s been two years since the vampires quit the quirky little town and things are mostly back to normal — broken dreams and never enough whiskey. But that’s about to go to hell.

Hold on tight for a midnight showdown when a psychotic religious order takes the entire town hostage — including Tucker’s long-lost brother — to lure Lizzie from her frozen exile in Russia. The mad monks know Lizzie’s murder will strand the ruling vampire elite in a disembodied afterlife so the cult can impose their twisted beliefs on the living and undead alike. It’s a rip-roarin’ stampede as a cowboy and a vampire try to round up the shattered pieces of their unusual romance.

With the fate of the world on the line yet again, can Tucker and Lizzie put aside their broken hearts to face one last sunset together?

Slap leather or reach for the sky.

This is the fourth book in The Cowboy and the Vampire Collection.

Read on to learn about the author, enter the tour giveaway, and check out my review!

Between the two of them, Clark Hays and Kathleen McFall have worked in writing jobs ranging from cowboy-poet to energy journalist to restaurant reviewer to university press officer. After they met, their writing career took center stage when they wrote the first book in The Cowboy and the Vampire Collection as a test for marriage. They passed. Clark and Kathleen now live in Portland, Oregon.

I bought my copy of THE COWBOY & THE VAMPIRE: A VERY UNUSUAL ROMANCE at a library sale, because I am a vampire freak, and the title made me do a little happy dance. The description just made me drop everything and read it the moment I got home. I spent every spare hour until I’d devoured the whole thing cover to cover. I still have that edition of the paperback on my vampire shelf with my other keepers.

I’ve kept up with Tucker, Lizzie, their friends, enemies, and frenemies over the years. The journey has been a twisted tale, rocketing up and crashing down, jolting with adrenaline and lust, sobbing and chuckling, and looking over your shoulder, frightened of what might be hiding in the shadows. This final installment doesn’t disappoint.

It’s never a dull moment in Lone Pine, and that’s a big part of the fun. Of course, it’s not always fun. Sometimes it’s scary, and sometimes it’s downright heart-wrenching. This final volume is no exception.

There’s been a lot of pain and loss for these characters, especially Tucker and Lizzie. Especially-especially Tucker. The terrible events of the series have taken away his dad, his horse, many of his friends, the woman he loves, and his unborn son. All he has left is his brother, who now has metal limitations from a bullet to the head, and his ever-faithful dog, Rex. THE LAST SUNSET threatens everyone that he loves all over again.

Naturally, he blames the vampires. This all started with them, after all. But now there is a new and more dangerous threat to humans and vampires alike: a  death cult called the Canopic Guild. They are recruiting unwitting humans who are lost, unsure, or limited in their understanding. Like any cult, their plans are nefarious: they have discovered a way to wipe out the civilized vampires who follow Lizzie in their day rest, and plan to use that power to take over, ruling the remaining vampires and humans alike.

If you’ve gotten to know the characters throug the series, it’s difficult to see them in the condition they’re in now. Tucker is bitter and heartbroken, poor Travis struggles with day-to-day situations, and Lizzie is miserable in her new role as vampire queen. Tucker and Lizzie are forced to overcome their painful past and work together to fight against the cult. The painful reunion made me cry more than once, remembering all that came before.

The thing I like best about these books is that they are full of so many things I love in my fiction: horror, intrigue, love, lust, and VAMPIRES! They’re also not traditional romance, they’re more like horror/action/western fiction with strong romantic elements. Another reason this series does it for me is the presence of a strong romantic couple throughout. A happy ending is never guaranteed for them, and in fact, still isn’t in this book, but it is clearly Tucker/Lizzie forever. I love that Travis and Rex still love Lizzie, even when Tucker is so wounded he can barely stand to look at her.

It’s a terrific, original piece of vampire lore, and unlike a lot of the books I read and love in the genre, it manages to be full of blood and violence, while never losing its essential heart. The characters — even the secondary ones — are all so rich and multi-layered, it’s hard not to get involved with them and care about their fates. Even Rex the dog has a distinct personality that makes him an essential member of the ensemble. (I’m always afraid pets in any horror situation in a book, on TV, or in a movie is going to die, so I tend to shy away from stories with them in it. I can HIGHLY recommend, if you’re sensitive to pet death in entertainment, that you check out Does the Dog Die? A fantastic site that lists many movies, and rates them based on the fate of the animals!)

There are a lot of clever ideas in this series that help it stand out: weapons, psychic powers, and my favorite thing, vampire politics. The way Lizzie has started running things is really intriguing, and because so many of her kind don’t like it, she’s constantly in danger. The final battle is great… and I can’t really say anything more than that without spoiling it!

I recommend starting this series from the first book, so you’ll get the full impact of the story. A lot happens between books 1 and 3 that plays out in book 4. You can get a good idea of the series if you just read the final one, but you’re really missing out!

2 comments on “BBT Book Blitz & Review – THE COWBOY & THE VAMPIRE: THE LAST SUNSET”

Welcome to Bloodthirsty Muses, home of author H.A. Fowler. You can call her Heather.

She frequently breaks the blog rule of posts no longer than 1000 words. Topics include the writing life, her books, book reviews, and general thoughts on life. Sometimes she may share (what she believes is) helpful information.

Activities, Challenges, and Other Stuff!

What I’ve Been Reading

OOOOO – Five Full Moons: OMG I LOVE THIS BOOK GO GET IT RIGHT NOW!
OOOO – Four Full Moons: I REALLY liked this. Well worth reading, and possibly re-reading!
OOO – Three Full Moons: Good! Worth a read.
OO – Two Full Moons: Not really to my taste, but not terrible.
O – One Full Moon: Has serious flaws that make it difficult to read and review fairly.
DNF – Did Not Finish: Poor writing, flimsy plot, badly drawn characters, etc.

A Wise Polish Person Once Said: